Please find below our Investment Market Update as at 4th December 2020.

This week, the focus is on the UK economy. Brexit negotiations are getting fraught and the deadline is getting close. So, what are the latest thoughts out there as to what’s going to happen and the impact on the UK economy, stock markets and the Pound?

The UK “is a buy” say economists at Goldman Sachs who see a free-trade deal being signed between the EU and UK around about the time of the December 10-11 European Council meeting, a development that could unlock gains in the Pound and UK-focussed stocks.

On the website ‘Pound Sterling Live’, they also reported comments from analysts at Goldman Sachs about the UK becoming the first country in the world to approve the Pfizer/BioNtech Covid-19 vaccine, and how this should provide an additional outperformance boost to the economy and its currency.

“While the UK-EU trade talks have taken longer than originally planned, our economists continue to expect a ‘thin’ free-trade agreement in goods; the EU Council meeting on 10-11 December looks like an achievable goal to see a final agreement” said Sharon Bell, a strategist with Goldman Sachs in London. The EU Council meeting appears to be a final chance for EU leaders to fight out a final compromise and agree to a deal.

Now, of course, this is just one view. But what are the implications for our portfolios and the re-positioning of assets?

It’s not a case of black or red, or odds and evens!

We’ve mentioned in recent updates that we will be looking to recycle some of our holdings back towards a more UK centric exposure. UK domestic stocks have certainly lagged their European and American counterparts. The double whammy of the vaccine(s) becoming available and the possibility of some sort of deal with the EU bodes well for the UK. We like the idea of investing in financials once again and will be undertaking a switch in our Momentum portfolio, one that already holds 20% in UK smaller companies. We do have an exposure to the UK across our other portfolios and we are anticipating having a gradual rotation towards the UK, however we will still favour the global exposure which has stood us in good stead during the recovery.

What we won’t be doing is placing our bets on a deal when a no deal could arise. So, it’s not one or the other. We may miss out on some of the immediate bounce, but we don’t want to gamble unnecessarily. When we know the position, it will be much easier to be able to foresee the direction of travel. However, depending upon your views, if you do wish to manoeuvre some of your assets solely towards the UK now, then please let us know.

The Pound is expected to strengthen too!

The overhang of Brexit since 2016 has damaged the UK economy in terms of foreign investment. The Pound has weakened as confidence has waned. Goldman Sachs say further gains for Sterling are possible as they see a Brexit trade deal as aiding a “strong economic turn” for the country. Goldman Sachs economists see “substantial” room for an economic rebound in 2021, as activity still remains depressed and the UK is well positioned with regard to vaccine distribution.

The vaccination programme is a quarter earlier than economists had previously expected. Goldman Sachs are expecting UK growth of 7% in 2021 and 6.2% in 2022, which is significantly above the consensus estimates of the institutional analyst community. “Encouragingly, the latest PMI data held up well, especially for manufacturing,” says Bell.

These developments are in turn expected to support the British Pound.

Of course, it’s not all plain sailing

As reported in Bloomberg this morning, the Brexit trade talks that were on the verge of a breakthrough descended into a fight between the UK and France, with British officials claiming the EU had suddenly turned up with new demands to placate Paris. They didn’t say what the demands were, and EU officials denied it, suggesting Britain may be trying to pressure the bloc or disguise the fact that it is making concessions. Michel Barnier may return to Brussels today to consult with diplomats from member states, an EU official said. A classic negation tactic.

It’s not like the English and French to be at loggerheads, is it!

Certainly, a lot has been said about the possibilities of raising taxes on capital gains and the removal of entrepreneurs’ relief for those selling a business. Over the last few weeks of lockdown there are more reports and comments coming into play suggesting that it may be too soon to hit the country with tax hikes when it is in the midst of the deepest recession for 300 years. Makes sense to me. In fact,Boris Johnson has suggested this week that the government will examine its tax and regulatory regime with a view to stimulating activity rather than dampen it. Tax hikes will come, but surely this should only be implemented when there is certainty and confidence that we have a growing economy.

Boris Johnson and the government have committed to the deepest cuts in greenhouse gas emissions in the G-20. We have to be careful of the spin around the green revolution but there is no doubt it is high on the agenda. The government stated in November that they have a ‘10 Point Plan’ for a Green Industrial Revolution. They claim it will bring 250,00 green jobs to the UK. However, it is thought that of the £12 bn announced, only £3bn is new money. Regardless, the revolution is underway!

When we look towards Europe, Germany is also active in its commitment to the environment. Bloomberg reported that electric vehicle sales in Germany will surpass California’s for the first time, with a range of government incentives propelling Europe’s biggest auto market. 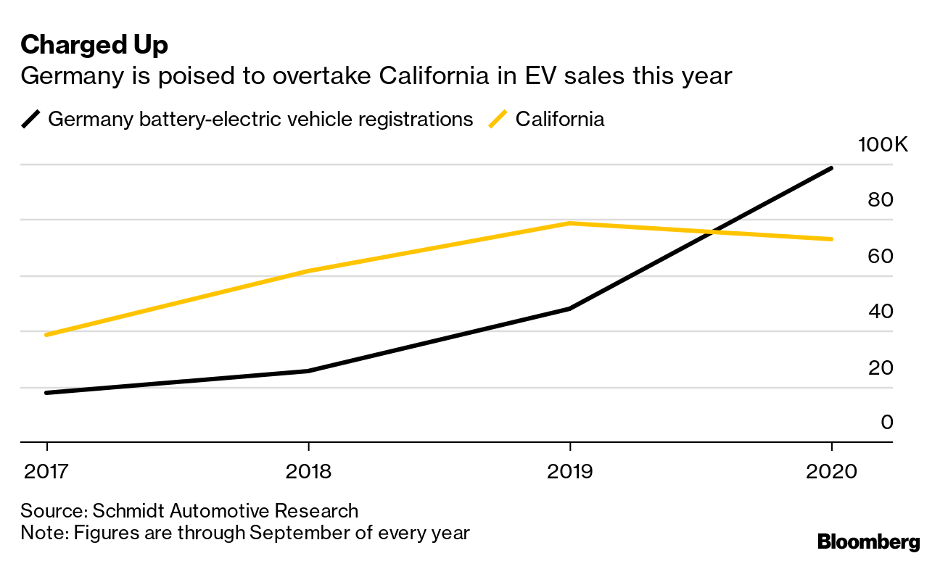 Contrary to comments I have read in some areas of the press, this green agenda is not a fad. There is a clear commitment from governments around the world. Subsidies are essential to influence behaviours and there is no doubt that the ‘environmental genie is out of the bottle’ and it’s not going back.

Have a great weekend.