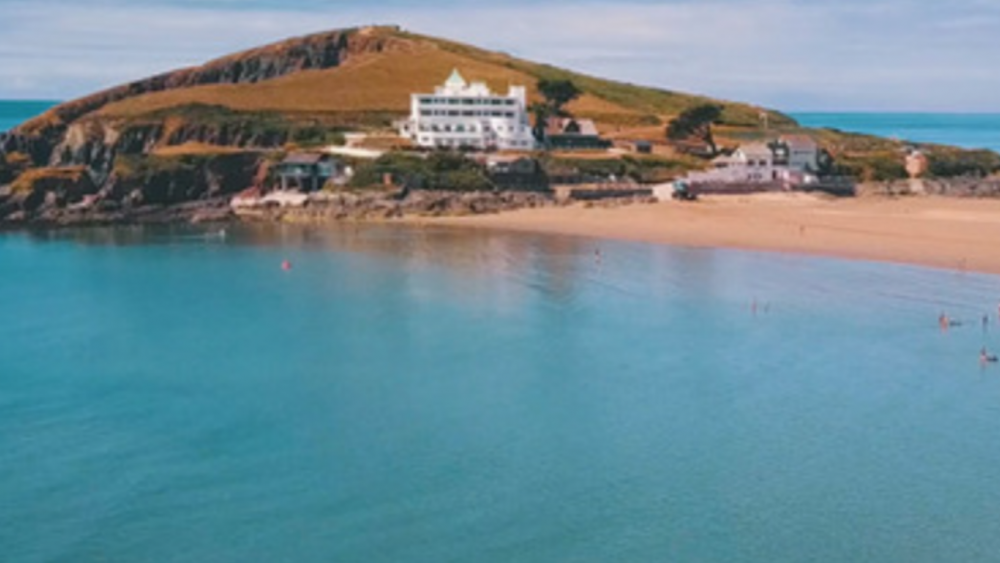 If it’s good enough for Agatha…

Agatha Christie’s book “And then there were none” was written on Burgh Island, a place where my wife and I stayed for a couple of days last week. A decadent and wonderful place; a real treat. We went for a bit of R & R but also to celebrate my wife’s birthday which was earlier in the month.

A bit of history

Burgh Island is an art deco hotel built in the late 1920s. In the 1930s improvements were made including the addition of the Captain’s cabin which was the actual cabin from HMS Ganges, a warship built in 1821.

It is a grade II listed building and one of the foremost examples of Art Deco style in Europe. Dinner was served in the ballroom on Friday night. In keeping with the Art Deco era, black tie and cocktail dress are mandatory.

Agatha Christie made her second home here on the island, writing two books during her time. Noel Coward also stayed on the Island, originally planning for three days, but this turned into three weeks!

…and you can see why!

Coming off the drugs

Why am I telling you about this? Don’t worry, you are spared our holiday snaps!

When I say “off the drugs”, I don’t mean in the medical or lifestyle context but in the technological sense. No internet, no TV and for me, no reading of e-mails. Most importantly, we were devoid of any news. We didn’t know what was going on in the world for the whole time we were there… A bit like the residents in Agatha’s book. Although I have to add, having watched the recent three part drama recently on TV, ours was an altogether much more joyous experience!

You should try it… nothing like a bit of escapism. Therapy for sure!

Taking my own advice

Of course, lockdown gave many of us some ‘downtime’ but we were still exposed to the unfolding turmoil of the pandemic and the avalanche of negative news. Personally, “it was about time I took some of my own medicine” as a client said to me recently. You see, I’m always talking to clients about the work\life balance but I hadn’t taken any time off so far this year and lockdown, for me, actually meant I was at the helm, along with my fellow Directors, steering everyone through the turmoil. I’m not being a martyr here, just saying that I was busy, albeit in a different way. Needs must and all that.

Lockdown has been good for some

My point is that this type of work ethic is unsustainable without having the balance in other parts of your life. Hopefully, the lockdown experience has caused a recalibration for those working previously, in a way which was all consuming.

I spoke to a couple of new clients recently who own their own business. Lockdown wasn’t good for their business but what it did, was give them timeout and allowed them to hop off the treadmill which had felt until then, like it was running faster and faster. They are now planning to sell their business in the next 18 months and for them personally, “lockdown was the best thing that could have happened to us”.

Their treadmill is not as challenging as it was previously, both physically and mentally. One, because they used lockdown to get fitter and secondly because they now have a plan of action. They can see the end of this phase of their lives and the start of a new exciting phase which offers them more time and freedom. As he said to me, “if we hadn’t have had lockdown and taken time to look at our finances and organise a plan with you guys, we’d have just carried on working harder and harder. Probably until one of us couldn’t stand it any longer or we became ill, or dropped dead!”

It just goes to show what can be achieved when you take time out and allow your thoughts to cascade over you. You begin to resonate on a different wavelength. Agatha wrote a couple of books and it’s easy to see why her stay on Burgh Island stimulated her thought processes. Albeit, murders were uppermost in her mind!

My wife and I were only in residence for a couple of days and whilst it allowed me to chill, I also had waves of clarity about the opportunities I want to explore in and out of the business.

Modern life is good to most of us, but I can’t help thinking it must have been lovely to have lived in those times when there were less interruptions and more time to think clearly.

Go on, I dare you… treat yourselves to a visit to Burgh Island. You never know what might happen.