Please find below our interim Investment Market Update as at 23rd April 2021.

A short one this week, as promised. Mind you, there is always a lot to write about.

Last week we saw positive economic data and a solid start to the corporate earnings season in the US, which helped lift global equities to their fourth straight weekly advance.

The MSCI All Country World Index reached a record high on the back of better than expected US data, strong earnings, and China’s growth over the rolling year. A global strategist from UBS Wealth Management stated, “as the economic reopening accelerates in the coming months, we believe the bull market for equities remains on a solid footing”. 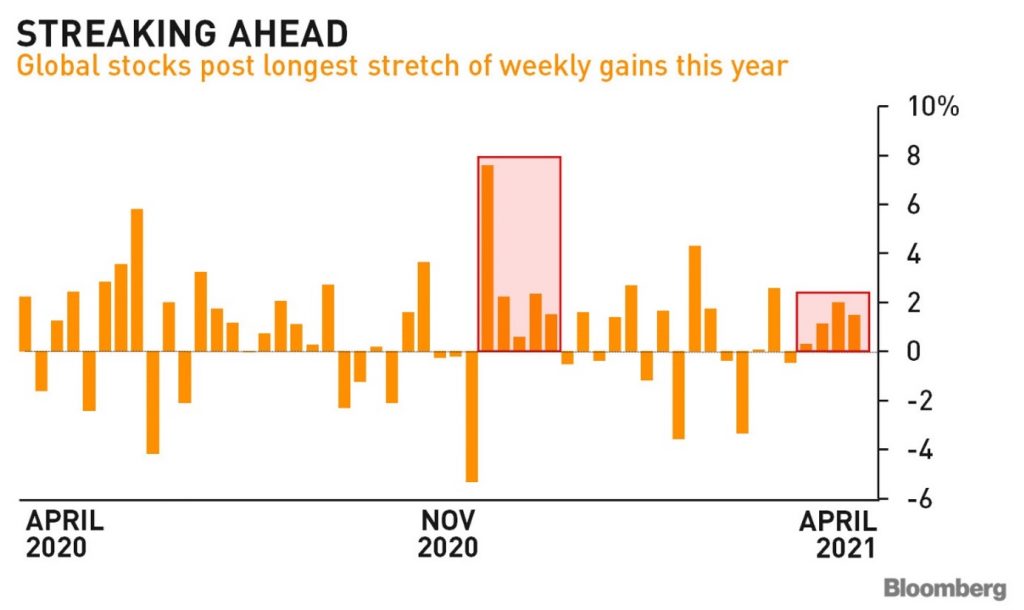 Then came the market jitters!

Early this week, indices around the world fell as rising cases of Covid-19 led to renewed concerns over the economic impact. Earnings season in the US is, however, expected to be the best for the last two years. Equity markets recovered some of the lost ground only for Biden’s proposed capital gains tax hikes to spook the markets in the US yesterday. As I have said previously, until we have more certainty, expect bursts of good performance and then a pull-back in sentiment. Of course, stock market traders are loving this!

I thought I’d share this story with you. According to Bloomberg, European polluters will soon be able to ship their carbon emissions to Iceland… wait for it… to be turned into stone!

Icelandic start-up, Carbfix is building a terminal hub to receive Co2 transported in specially designed ships. There it will be turned into underground rock using a technique imitating and accelerating the natural process of mineralising carbon, providing a permanent storage solution. Mind blowing!

Green is the colour

Every week, LGT Vestra send us an update giving us an insight to what is happening in the world of Environmental and Social Governance (ESG) and so I thought I would share some of the dynamics evolving.

Coffee waste can supercharge the growth of forests

What happens when you dump 30 trucks full of coffee waste on land set aside for reforestation? Well, the forest recovers much faster, according to a study based in Costa Rica. Researchers spread coffee pulp, a waste product of coffee production, across old agricultural land measuring 35 x 40m. The plot recovered four times faster than another control area.

“The results were dramatic“, said Dr Rebecca Cole from the University of Hawaii, lead author of the study. “The area treated with a thick layer of coffee pulp turned into a small forest in only two years while the control plot remained dominated by non-native pasture grasses.” Working with collaborators from the Swiss research university ETH-Zurich, Cole’s team spread a layer of coffee pulp half a metre thick across the entire area. This eliminated the invasive grass species, allowing native trees to recolonise quickly, their seeds spread by wind and animal dispersal.

After two years, the area treated with coffee pulp had 80 percent canopy cover compared to 20 percent in the control area. The trees in the coffee pulp area were also four times taller and there were significantly higher levels of nutrients in the soil, including carbon, nitrogen and phosphorous. Click here if you would like to know more!

Food waste could be instrumental in producing sustainable aviation fuel, according to a recent study. Greenhouse gases from the aviation industry currently contribute 12% of transportation emissions and are expected to continue growing. It is projected that the industry’s emissions will double pre-pandemic levels by 2050. As such, researchers are working on finding viable biofuels for net-carbon-zero air travel.

The study published in Proceedings of the National Academy of Sciences, was conducted by scientists at the National Renewable Energy Laboratory (NREL) in collaboration with the University of Dayton, Oak Ridge National Laboratory and Yale University. According to the study, using untapped energy in food waste to generate sustainable aviation fuel (SAF) will provide an avenue to deal with two types of pollution at the same time.

Plenty of food waste ends up in landfills, where it generates methane gas, one of the most dangerous greenhouse gases. The researchers found that this biofuel has a 165% decrease in net carbon emissions compared to standard fuel. Some large aviation companies have already started investing in SAF with the hope of finding a solution that can be widely used. Click here if you would like to know more!

‘Whitest ever’ paint reflects 98 % of sunlight

And as if coffee and food waste were not enough for today’s update, scientists in the US have developed a paint significantly “whiter than the whitest paint currently available”. Tests carried out by researchers at Purdue University on their “ultra-white” paint showed it reflected more than 98 percent of sunlight. This suggests, the scientists say, that it could help save energy and fight climate change. Painting “cool roofs” white is an energy-saving approach already being rolled out in some major cities.

Professor Xiulin Ruan from Indiana says, “it’s a big deal, because every 1 percent of reflectance you get translates to 10 watts per meter squared less heat from the sun. So, if you were to use our paint to cover a roof area of about 1,000 sq ft (93 sq m), we estimate you could get a cooling power of 10 kilowatts. That’s more powerful than the central air conditioners used by most houses.”

In the US, New York has recently coated more than 10 million sq ft of rooftops white. “We did a very rough calculation,” said Professor Ruan. “And we estimate we would only need to paint 1 percent of the Earth’s surface with this paint – perhaps an area where no people live that is covered in rocks – and that could help fight the climate change trend.” Learn more here!

Analysts expect the sustainable bond market to exceed $1trillion this year as corporates and governments raise capital to help accelerate the transition to a low-carbon economy. Nordic corporate bank SEB has significantly boosted its predictions for sustainable bond issuance for 2021 in an update published last week.

The latest edition of the bank’s ‘Green Bond Report’ notes that $387billion of sustainable bond issuances were released in the first three months of the year, a figure equivalent to roughly half the volume of the market in 2020. “With the first quarter of 2021 behind us, we are on track to exceed even our most optimistic scenario for the full year,” said Christopher Flensborg, Head of Climate and Sustainable Finance at SEB. “We expect sustainable bond issuance of more than $1trillion this year, which is 25 percent more than we expected in our most optimistic estimate at the start of the year.”

As you know, Blue Sky have favoured such bonds over conventional bonds, and this is further supporting evidence of our strategies.

Follow the themes is our motto and there is no doubt the sustainable genie is out of the bottle!

Have a lovely sunny weekend.