Gary Neild and some other members of the Blue Sky team had a huge shock on Saturday 25th November as they celebrated the engagement of Director, Russell Skinner. The ‘engagement party’ turned out to be a surprise wedding! It’s not often that Gary is lost for words…

Bride-to-be Nikki Denny and partner Russell kept their big day secret from family, friends and work colleagues. They went to great lengths to hide the wedding, including sending the guests a “save the date” card for a fake wedding in 2019. When 100 guests turned up to the venue, they were surprised that they couldn’t see Nikki. Russell then stood up and gravely announced that the 2019 wedding was off, leaving many fearing the worst.

But he quickly changed his tone and admitted that Nikki was upstairs at the hotel and that her dad, Mike, needed to go up and get changed so he could give his daughter away “in 20 minutes time.”

Nikki, 37, a florist from Lytchett Matravers, said “We got engaged two years ago. I was pregnant at the time and we didn’t get round to having a party so it was easy to convince people the party was for our engagement. We were just lucky that everyone turned up and that they were on time. My dad looked so surprised and couldn’t believe that I had another suit for him upstairs.”

Nikki said her parents, Mike and Jane, along with Russell’s mum Cindy, and step-dad Roger, had no idea there was going to be a wedding. Guest of honour was the couple’s little boy, 20-month-old Joseph, who spent the entire ceremony dismantling the hotel’s Christmas tree!

The only people in on the secret were the bridesmaids, ushers, readers and best man. Nikki said “It was really difficult to keep it secret but it was worth it because everyone got a lovely surprise.”

The whole team at Blue Sky wish Russell and Nikki every happiness for their life together. 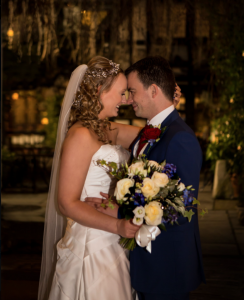