Please find below our interim Investment Market Update as at 7th May 2021.

The news flow is positive

Unless, of course, you live in a country rife with Covid variances. It is so sad seeing the news footage from countries like India. It highlights significant infrastructure and policy failings which is not untypical in developing countries although some developed countries have also been found wanting.

Fortunately for most of us who live in the UK, we are making tremendous progress with our vaccination programme which means lockdown measures continue to transition towards us having our full freedoms back. The UK stock market indices have reflected this positive outlook, helped by the Bank of England improving its forecast for the UK economy – predicting the fastest growth rate in over 70 years.

The earnings season in the US sees many companies posting higher than anticipated results which has seen the Dow Jones reach a record high. However, the Federal Reserve has warned investors about a bubble forming in the more speculative stocks.
Of course, there are always counterbalances to positivity and the continued angst between China and the US continues to rear its head. The fallout from Brexit also continues in many forms with heightened emotions around the fishing industry taking our memories back to a bygone era.

I’ve spoken before about the size of the debt being racked up around the world, the greatest since the World War II. It follows therefore, with all the stimuli, that we are going to mirror an economic recovery not dissimilar to what happened after the war, although the world is a very different place now.

The forecasts from the Bank of England have put paid to the prospect of negative interest rates as inflation is expected to rise. However, they also stated that they expect inflation to remain under control even if it overshoots their targets briefly in late 2021. Consistent with my comments in recent updates.

It is expected that the economy will grow by 7.25% this year, a rise from previous forecasts of 5% made some three months ago. However, this does mean that interest rates are likely to begin rising slightly in 2022. The steer is that rates will rise by 0.6% over a three-year period. 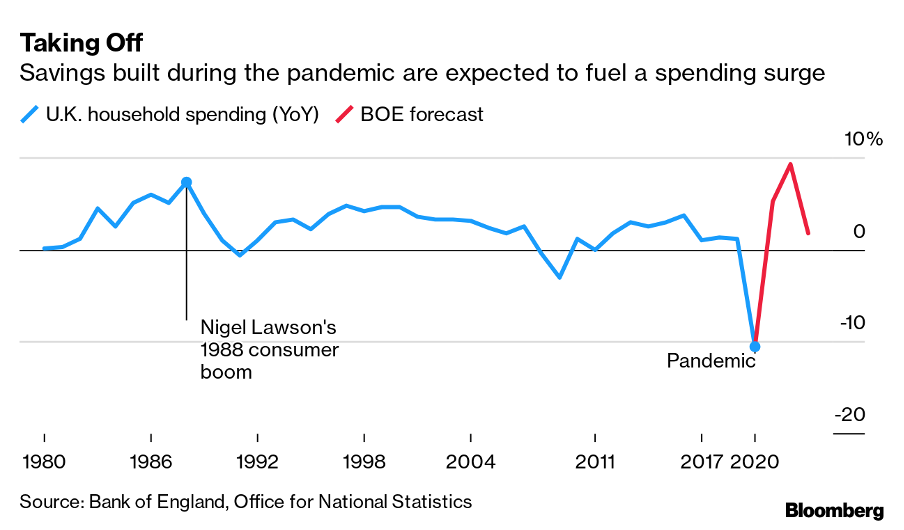 It also means that the Bank of England will begin to slow down its quantitative easing programme. It had planned to purchase £150 billion of assets in 2021 and by the end of April it had bought £67 billion. The comment was made that whilst they are ahead of their target for the year, the pace of these continuing purchases could be slowed if the recovery in the economy accelerates.

Asset wise, gilt yields rose and prices fell (although most of the changes were already anticipated and in the price) because of the anticipated slowdown in the purchase of bonds. The 10-year yield rose 0.02% to 0.82%.

A similar story in the US

The outlook for the US economy is also very positive. There have been a series of strong economic reports this week which have helped propel the Dow Jones to a record high. Applications for state unemployment insurance fell to a new pandemic low and other data showed a rebound in productivity. Like in the UK, it’s expected that the Federal Reserve will start the transition of reducing its huge monthly bond purchases in the second half of the year, although at the moment, it is committed to near zero interest rates to bring about a full recovery.

Evidence of the recovery can be seen in the price of copper as reported by Bloomberg this morning. It has soared to a record high on expectations of economies around the world rebounding, leading to a boom in global demand. Just one indication of soaring commodity prices.

A warning from the Federal Reserve (Fed)

There are concerns of overheating due to the extraordinary amount of stimulus being delivered. Near zero interest rates and the huge bond purchases, with the Fed buying $40 billion in mortgage-backed securities and $80 billion in Treasuries every month, have fuelled a search for returns and helped boost asset prices, including those of risky investments such as speculative stocks in crypto currencies and high yield debt.

The Fed’s financial stability report found that rising risk appetite is stretching valuations and is creating weakness in the US financial system. They have stated that prices may be vulnerable to ‘significant declines’ should risk appetite fall. According to Bloomberg, this was the closest to saying the word ‘bubble’!

Indicators are also pointing towards an elevated risk appetite in equity markets, especially for those so called ‘meme’ stocks (stocks that have huge increase in trading volumes after going viral on social media). Elevated equity issuance through Special Purpose Acquisition Companies (SPACS) also suggest a higher than typical appetite for risk among equity investors.

Crypto currencies… what do we make of them?

We get asked all the time about Bitcoin and crypto currencies, but whilst we understand their popularity, we don’t advise. They are not regulated, and consumers have no protection.

If you are going to invest in such domains, this should be a marginal part of your wealth as you could lose most of it, if not all. I know some people think such sentiment is scaremongering, but I clearly remember the dot-com bubble bursting. Before the collapse, you were deemed somewhat of a dinosaur if you did not invest in these new technology companies. Afterwards you appeared somewhat wise!

This is not to say that we don’t think the blockchain technology won’t play a significant part in the financial world moving forward, far from it. The dot-com bubble bursting did not mean the end of technology. Quite the opposite, but a different rationale and a more measured outlook came to the fore.

The Governor of the Bank of England, Andrew Bailey, reinforced the dangers of crypto currencies when he stated this week, “be prepared to lose all your money”. This was in response to a question he was asked about his views on the wild price swings.

He went onto say “I’m afraid they don’t have intrinsic value,” Bailey told journalists on Thursday. “Now that doesn’t mean to say that people don’t put value on them because they can have extrinsic value. But they have no intrinsic value. So, I’m going to say this very bluntly again: buy them only if you’re prepared to lose all your money.”

Analysts are at a loss to understand the huge price swings, siting Dogecoin as an example. They seem to be largely motivated by memes and Elon Musk tweets according to Yahoo finance. But with such high profile activity, no wonder its attracting lots of interest!

The current crypto craze appears to be an extension of the retail stock trading boom witnessed at the beginning of this year. An army of amateur investors coordinated on Reddit, to wage a war against short sellers in stocks like GameStop and AMC cinemas.

On a more sedate note

We are making some changes to our infrastructure holdings with the emphasis on retaining the core of global infrastructure but complementing the holding with other assets designed to boost performance and at the same time, lower costs.

We will be in touch later today with a switch notice for the relevant portfolios.

I’m going to leave you with a quote from Warren Buffet sent this week by LGT Vestra:
“This has been a very unusual recession, but right now, business really is very good in a great many segments of the economy.”

Have a lovely weekend and I hope you are going to keep drier than me when I’m on the golf course early tomorrow morning!