Please find below our interim Investment Market Update as at 5th March 2021.

It’s a bit bumpy at the moment!

Global equity markets and bonds have fallen together which, in the short-term, means there has been little downside protection for portfolios.

This is not the first time we have seen this happen. On occasions, we have also seen equity and bond prices rise in unison which has a positive impact for the portfolios. We know it never lasts for too long and this is our opinion of the current market turmoil. At some point the investment markets will find their natural buoyancy.

The pain more than the gain

A saying which is often used in our world is that we “feel the pain more than the gain”. When it is painful it often feels worse than it actually is, but nonetheless, it’s not easy to bear. Experienced investors, of course, have seen it all before and the key is always to sit tight.

Work behind the scenes

As our readers know, we have two investment approaches; one where we embrace model portfolios through our investment partners and the other which involves us managing money internally, typically having a more focussed approach. With our internal portfolios we make switches periodically, but for the model portfolios there is always work going on behind the scenes. Rather than taking bold positions, the changes that are made are mainly tweaks around the margins, with a view to providing protection on the downside and seizing upon opportunities where they present themselves. Optimising returns is the focus.

In a visual context we have the core, in the form of the model portfolios managed by our external investment partners and then the satellite investment themes around the outside which are chosen by us internally at Blue Sky. These themes have performed very well in recent times but as with markets in general, they are experiencing a pull-back in prices. 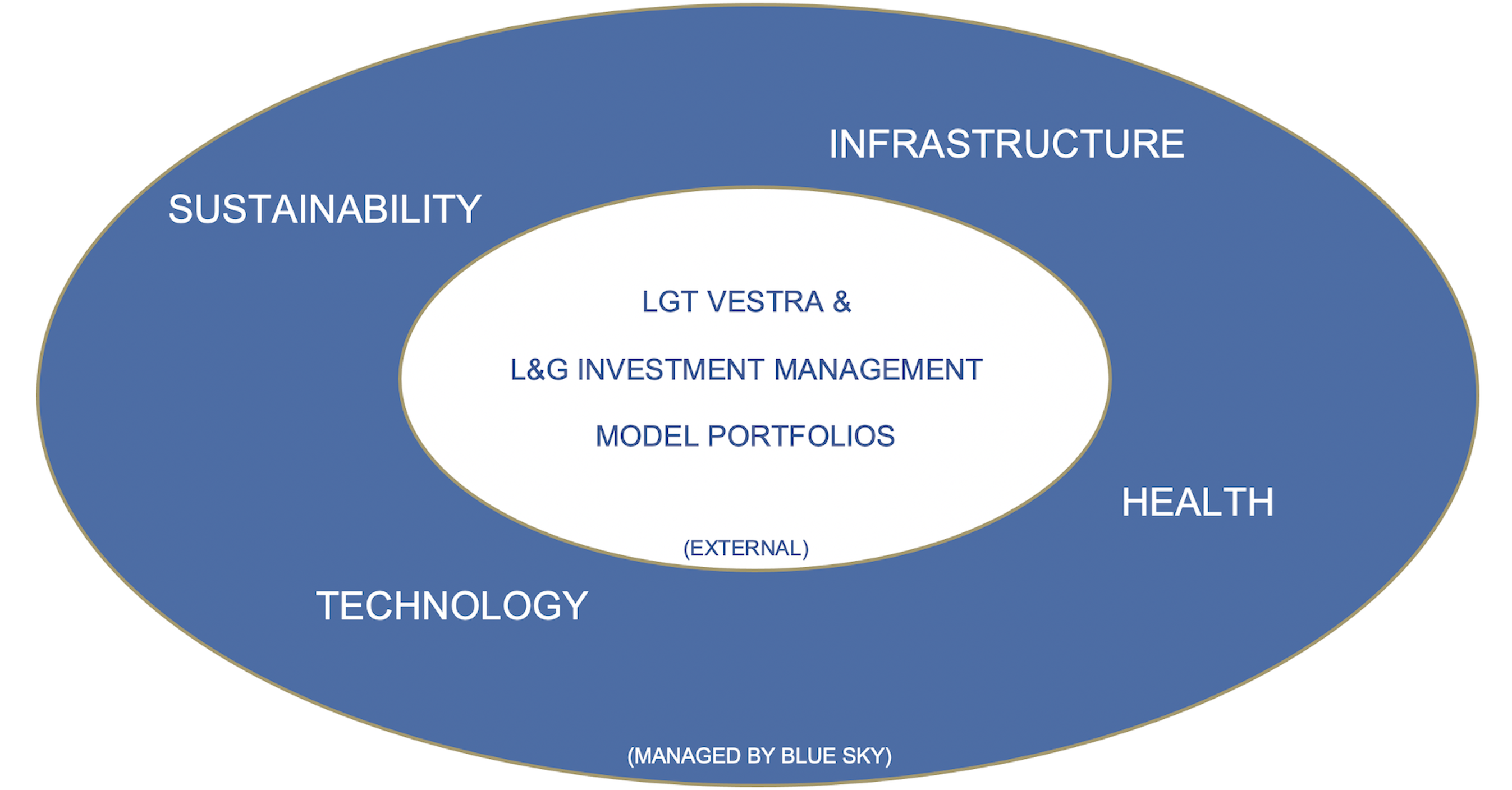 Is the euphoria over?

Certainly, there have been some curious events happening across markets in recent weeks. It all seemed to start when the Reddit social media platform encouraged their followers to buy stocks which were shorted by hedge fund managers.|

Recent turmoil, however, has had a much wider impact. To UK investors, this started with the pound strengthening adversely, impacting returns for global stocks. The storm freeze in Texas which impacted renewable energy stocks hasn’t helped Infrastructure and Sustainable investments, and now we have fears over strong inflation which has resulted in weaker bond prices. A lot going on for sure!

In percentage terms, bond yields have risen steeply. Ten-year UK gilt yields have more than quadrupled this year from 0.18% to 0.81%. Similarly, in the US, yields have risen from 0.91% to 1.48%. The fall out has seen global equity growth stocks give up most of their gains for 2021.

Due to inflation fears, long dated interest rates have risen. This has led to the value of bonds falling along with equities. Normally a balanced portfolio will have a mix of bonds (40%) and equities (60%) with a few alternative assets.

What does this all mean to our investors?

A debate is emerging in investment circles about whether the inverse relationship between bonds and equities is still appropriate. Something Sanjay from LGT Vestra questioned at our last Blue Sky face to face seminar way back in January 2020.

The last time we saw equity and bond prices falling for a sustained period was in March 2020, when we went into our first lockdown.

Bonds have been held for protection and not for income, but this conviction is being challenged as bond values are falling. Bond prices have been falling since April last year and we have used our satellite themes to avoid this exposure, one of the reasons our portfolios have performed so well.

The fear during the initial phase of the pandemic was deflation, with central banks and governments saying they would do whatever it takes to create growth and inflation. The bond markets suggest that they may have overegged it, just at the time when the long awaited $1.9 trillion dollars stimulus is becoming a reality.

The Federal Reserve Chairman, Jerome Powell, clearly thinks inflation is not an issue to be overly concerned about, but the current market dynamics are testing his resolve.

It appears somewhat ironic that the reason markets are wobbling is because the global economic recovery is now predicted to be better than previously expected!

We thought it was worth sharing some key points from the latest update received from LGT Vestra this week; they areone of our preferred investment partners who most of you know well from our events and communications:

However, there are two key reasons for believing that such market forces may not be as detrimental as they may have been previously.

The reason most investment markets are falling is because of optimism. The earlier than expected vaccination programmes have led to expectations of a quicker than expected global economic recovery.

The UK has been one of the best performers recently but expect other developed countries to catch up.

There was always going to be a delicate balance between protecting and stimulating economies. The Federal Reserve and the Bank of England accepted that inflation would likely be the biproduct of stimuli but the alternative of having deflation when we would see the value of our assets, including our homes, fall in value over a prolonged period was not a desirable alternative.

The sun is shining through the clouds. Have a good weekend.