Please find below our Investment Market Update as at 4th March 2022.

Russia invaded Ukraine on the 24th February; just 9 days ago.

Last week I refrained from trying to come up with profound words around the conflict as many better scribes than me have encapsulated how the free world feels. My task is always to pass comment on how we see economic conditions unfolding and to articulate how this is likely to impact the money that we are privileged to manage.

We are humbled to receive so much positive feedback from clients regarding our services and to hear that the commentaries provide a degree of comfort during such emotional times. Very fulfilling for us at Blue Sky.

Last Friday I shared the dialogue between a colleague and myself about how we may have expected investment markets to respond to war. I also commented that as dreadful as wars are, equity markets tend to fare worse before a conflict or outbreak of war, than they do when the act itself is or has taken place. I spoke about the performance of the Dow Jones Index in the US during World War II as a case in point.

This week I am providing you with a table compiled by Bloomberg and presented to me during the week by LGT Vestra’s Chief Investment Officer Jonathan Marriott. I believe the table is self-explanatory but also amazingly compelling.

Please take your time to absorb how investment markets typically react in times of crisis. Obviously, all conflicts are different in their nature.

It’s worth noting the percentage figures at the bottom of the table which highlight that on 73% of occasions, the S&P 500 was in positive territory after three months and after twelve months when various conflicts began. 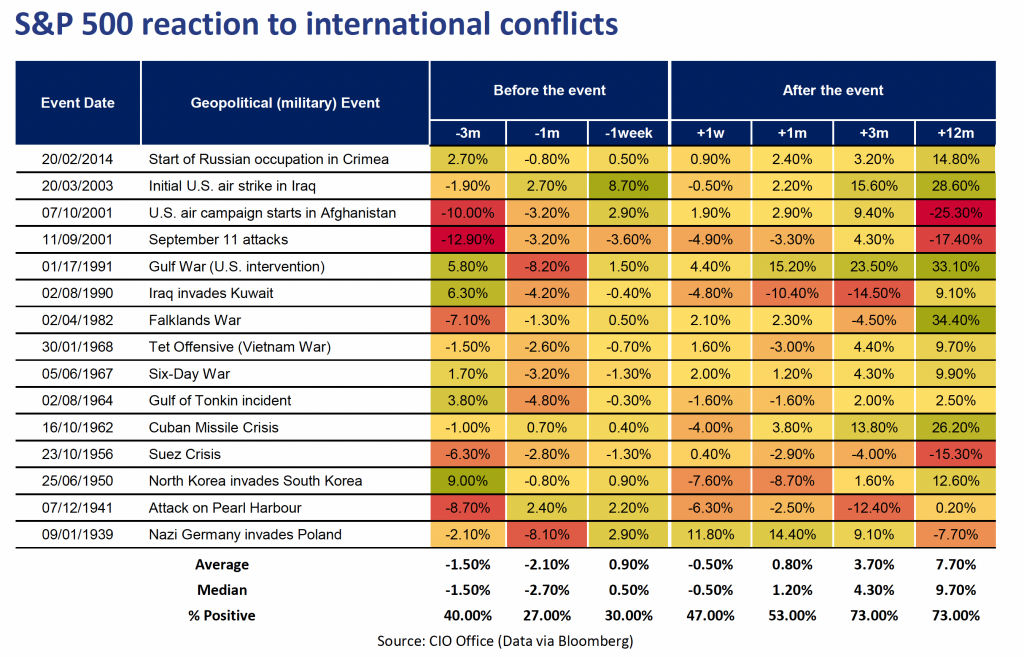 It helps that valuations look attractive

Whilst geopolitical events obviously affect share prices, the over-riding factor to international investors, is how healthy does each company appear, valuation wise.

A really good article appeared on Nasdaq.com yesterday which talked about price earnings ratios(P/E). Let me explain in context of the recent pull-back in share prices.

Price and earnings are important metrics. Prices have been falling whilst earnings have been moving upwards creating favourable price earnings ratios for investors. A higher P/E shows that investors are willing to pay a higher share price today because of growth expectations.

The article went onto say that around 95% of S&P 500 companies have reported so far for the last quarter, and 78% of these have exceeded expectations, in terms of revenue. This is remarkable in many ways as inflation really took hold in the last quarter and despite “supply chain disruption” US corporations have continued to post strong numbers and outpace expectations. Furthermore, approximately twice as many companies have raised their forward guidance than have lowered them.

The forward P/E ratios for the index now sit around its five-year average. It dipped below the average last week and the previous time this happened was in the early stages of the pandemic.

Central banks to the rescue?

Jay Powell, the Chair of the Federal Reserve (US) stated this week that he was in favour of just a 0.25% basis point hike in March with a “wait and see” approach after that. Investment markets had feared a 0.5% increase and so the reality looks like not being as bad as first anticipated, which has helped certain stocks.

The Blue Sky team have had a few conversations this week around the emotion of what is unfolding on our TV screens and the ensuing turmoil across markets. Three clients in the last two days have thanked us for encouraging them to spend less time being ‘hooked’ on the news with all of them saying they feel much better now they have pulled back from watching too intensely. As someone said to me yesterday “what’s the point… I can’t do anything about it”!

Some stocks have flourished

It’s important when understanding market behaviour, not to generalise from the specific. The rise and fall of the FTSE 100 has only a small bearing on what is happening across our portfolios. Yes, we do now hold the index in some portfolios, but the performance of the S&P 500 is more representative. Remembering, of course, that the FTSE 100 has a concentration in specific sectors.

Some constituent parts of our portfolios have grown whilst others have suffered. The noticeable winners in this short time are sustainable stocks and infrastructure, both of which are a core part of our offerings at Blue Sky. At the start of the year, over 60% of all the money we manage was invested directly into sustainability funds. Our global Themes portfolio has also proved to be resilient. Ironically, these holdings were hit by monetary policy expectations before the invasion but are the ones to now hold up. Technology stocks have also performed in a similar way.

Unsurprisingly, commodity prices have also risen strongly and benefitted our recent addition to the Momentum portfolio.

What hasn’t held up well are European financials which isn’t a surprise given sanctions and the implications for banking institutions. We have also been hit by our general European holdings which were looking quite rosy prior to the conflict.

It’s important not to panic and be consumed by anxiety when it comes to money. If you have a well thought out plan, which you evaluate frequently, then bouts of significant volatility are only likely to cause short-term pain and certainly shouldn’t de-rail any future plans you might have.
It’s also important not to look at the investment markets through the lens of one index, like the FTSE 100.

And whatever you do, don’t let the intensity of news impact your outlook.

Our thoughts are with everyone involved in the conflict.