Please find below our interim Investment Market Update as at 3rd September 2021.

Most of us are wealthier!

I know it’s bizarre, but here we are 18 months since the Covid -19 pandemic really started to take hold in the UK and most of us are better off than we were before. Despite us enduring the worst recession for supposedly 300 years!

I remember speaking at a live business networking event last August (the first one allowed) when I announced from the front, that the recession was over. I was met with a few confused faces as the news flow was shocking and it was easy to be caught up in a vortex of negativity as to what the future held. Of course, I was in a privileged position of being able to understand that stock market sentiment was an indication of what was likely to happen down the road. Certain sectors of the market were starting to boom, helped by financial support and stimulus from governments.

You may also remember that the stamp duty holiday was introduced in July last year and we all know what has happened since to property prices.

Very few thought that, a year on, many of us would be significantly better off.

There is a downside

Your potential inheritance tax may have doubled since last year.

With rising wealth often comes rising taxes. Or, in some cases, tax issues arise which haven’t previously been a consideration.

Think about it, if you have a property worth circa £700k, have a rental property for £350k and investments of £500k plus other assets of £100k, you have a potential inheritance tax liability. Well, your beneficiaries do! The inheritance tax threshold for a couple, to all intents and purposes, is £1 million. This little lot adds up to £1.65 million. With 40% tax levied on anything above the threshold, it can be painful.

In this case, in simple terms, the estate could be paying inheritance tax of £260k.

I think it’s fair to say that the latest surge in the value of many assets has caught people out when it comes to thinking about inheritance tax. Eighteen months ago, when property prices were subdued and the investment arena wasn’t so buoyant, I estimate that in the above case, the potential inheritance tax liability would have been circa £120k, if not lower. More than doubling in just 18 months.

It has been reported by HMRC that inheritance tax receipts for the period from April through to July increased by £500 million compared to the same period in 2020.

Total IHT receipts over the four-month period was £2.1 billion.

It is worth remembering that these figures are for receipts and not people passing away in this period, and therefore it is highly likely that these figures will be much higher in the months to come because assets values will have risen.
Adding to this probability, is the Chancellor’s introduction last Spring of a freeze on inheritance tax allowances until 2026. The nil-rate band (NRB) remained at £325,000 as did the residence nil-rate band (RNRB) at £175,000.

This so-called ‘Fiscal Freeze’ has meant more people will have an inheritance tax issue, compounded by rising asset values.

What can be done to mitigate this tax?

Besides spending it and giving it away, there are lots of other options that can be utilised through careful planning… and it doesn’t have to be expensive. Just don’t think it doesn’t apply to you because it probably does.

My weekly update before the long weekend was a catalyst for this communication with our portfolios having risen so strongly. Then, I spoke to a relatively new client who didn’t think inheritance tax planning applied to them.

In crude terms, add up your wealth (pensions aside… that’s more complicated), take off the £1 million allowance for a couple, and then multiply the difference by 40%.

The recovery is sector specific

Not much to report on the markets this week. All appears fairly benign. Of course, here in the UK we have had a shortened week.

What I will share with you though is some interesting data from the Office of National Statistics about how different sectors have suffered during the pandemic. This was reported in Bloomberg.

We already knew that there was a wide variance between sectors, but this data reinforces what most of us have seen and experienced. Fortunately for us at Blue Sky, we have pulled through unscathed to date. 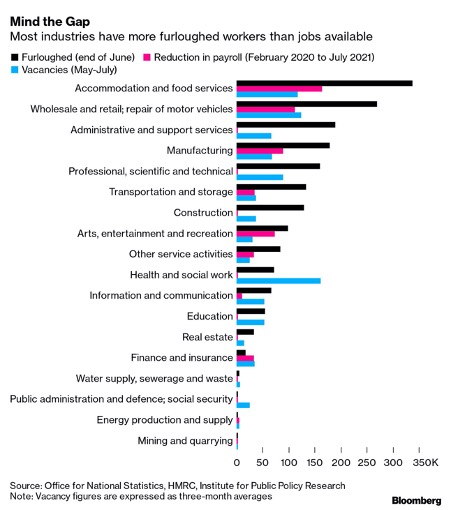 That’s all folks! Short and sweet this week. I’m off to see the Air Show now with Tammy and fellow sponsors of the Dorset Chamber of Commerce. Let’s hope the weather holds all weekend!