Please find below our interim Investment Market Update as at 30th April 2021.

As we enter the bank holiday weekend, I thought I’d give you a tad more to read than last week. There’s no doubt there is a lot going on and this is in addition to the political spats that are unfolding around the world!

So, where shall we start…

Most things appear quite rosy this week as a plethora of US company earnings are being reported which, in the main, are looking very good. There are the usual headwinds to consider like the ongoing spat between China and the US, fears over inflation and whether the markets can continue to support, in some cases, lofty valuations.

A bumper earnings season is underway

It’s earnings season in the US and largely they have not only supported valuations but outstripped estimates.

These figures were a much-needed boost for the big tech companies as their relative share price performance this year has been weak. However, there were some laggards in this space:

This further reinforces what we have been talking about over the last few weeks. As countries begin to open, we should expect behaviours to change. This feeds into the rotation argument from growth into valuation stocks.

European banks also posted strong earnings figures and an improved outlook. Standard Charter, HSBC, Deutsche and Santander being prime examples. We are delighted with our move to incorporate 20% of our holdings in our internally managed Momentum portfolio towards the X trackers Stoxx Europe 600 Banks ETF, just before Christmas. A move which has seen the ETF soar.

As reported in Bloomberg this week, JPMorgan analysts remain positive for this sector as the vaccination programme improves across Europe and because the bad debts they had forecast are not of the magnitude that was expected. Credit Suisse strategists stated that banks look cheap and are an attractive hedge against inflation. Higher prospective interest rates typically mean greater profit margins for banks.

A topic which has dominated headlines and sentiment across investment markets in recent weeks, there are fears that inflation will dampen company profits as consumers spend less due to a possible rise in interest rates.

Inflation will be different in each country, but in the US huge stimulus programmes are being implemented to encourage a spending spree and investment. LGT Vestra believe we are coming to an inflection point whereby we will either see a sustained upward trajectory of prices or a petering out of momentum. The question they pose is “will the inflation pendulum stop in time or will it be too hard to bring to a halt?” The Federal Reserve (the Fed) have said they will let inflation run hot for the time being, with Jerome Powell (the Chair of the Fed) taking a dovish stance and saying the US won’t raise rates until 2023. He will hope those comments don’t come back to bite him!

As you would expect, we and our investment partners are looking at how we implement strategies to head off any lasting inflation implications. LGT Vestra commented that they have been looking at inflation through three lenses: the consumer, input costs and inventory/production levels. The combination of these three factors may act to facilitate a perfect storm for inflation and the latest round of fiscal stimulus on top of loose monetary conditions has brought inflation hawks back into the spotlight.

Companies have been feeling the pinch of rising input costs, mainly driven by multi-year high commodity prices. Oil prices are up about 405% from a late April 2020 bottom, copper prices have increased 80% during that time and timber has reached its highest price ever.

Then we have the consumer. Figures demonstrate that consumers are wealthier than ever and there is a lot of pent-up demand. As economies continue to open, consumers will be spending with optimism, spurred on by positive vaccine news, and this will drive prices higher. 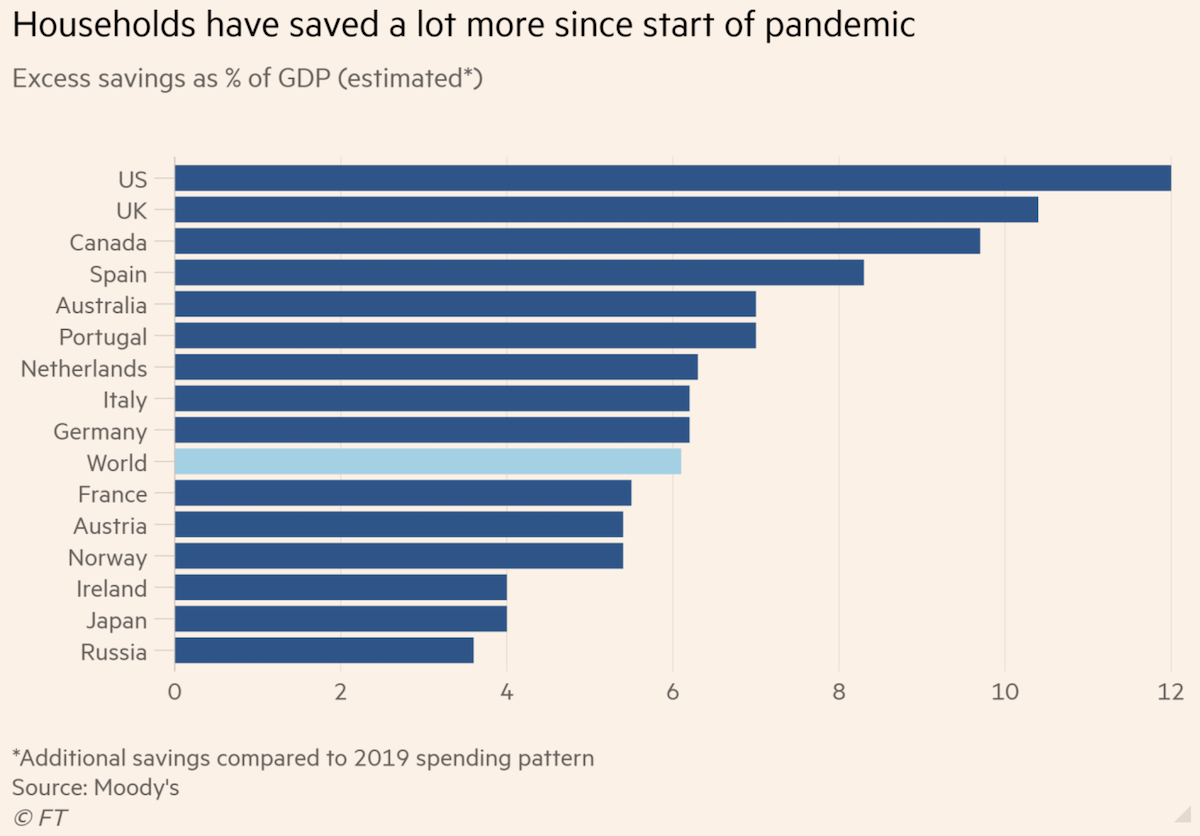 Inventories have also been low with no real need to stockpile. We are seeing a lot of headlines about weak supply chains and a shortage of things like semi-conductor chips. This shortage has been exacerbated by Chinese companies aggressively stockpiling over concerns that they may be facing further sanctions from the US regarding their 5G ambitions. This is now starting to infiltrate other industries, affecting everyday items such as washing machines and toasters. As supply tightens, expect to see price hikes as companies look to offload their increased costs.

UK wise, add into the mix the increased costs due to Brexit (which may actually slow down our early recovery) then inflation may surprise on the upside here too. Again, it will be interesting to see how the Bank of England and the government handle this delicate balance. Will interest rates rise? Will taxes rise further?

Our view is consistent with LGT Vestra’s thinking that inflation will exceed expectations and hit around 3%, before starting to come back down later in 2021, rather than deliver runaway inflation.

LGT Vestra believe that consumers won’t continue to spend so aggressively once the amount held in savings retreats. Rising input costs and inventory shortages will contribute to a short-term spike in prices, before reverting to more normal levels as supply chains also find some normality. At this stage, central banks are happy to sit on their hands, rather than react to short-term price spikes and hike interest rates. That could all, of course, change if we see a sustained period of inflated prices and central banks have to intervene. This is when interest rates would likely rise.

Within the LGT Vestra Model Portfolios, they have inflation protection in the form of US Treasury Inflation-Protected Securities (TIPS). In their view, one of the best investments in terms of hedging inflation. They also own some infrastructure assets across the portfolios such as Lazard Global Listed Infrastructure that have explicit inflation-linking embedded into contracts and pricing. Reinforcing, of course, our views about infrastructure.

Property prices are booming! As reported in the FT today, UK house prices surged at their strongest pace for almost 17 years as lockdown restrictions eased and buyers have rushed to take advantage of the extended stamp duty holiday. Prices rose 2.1% in April after posting an unexpected decline the month before, according to the Nationwide. Economists had expected a 0.5% monthly gain. This means that in the UK there has been a year on year rise of 7.1%. 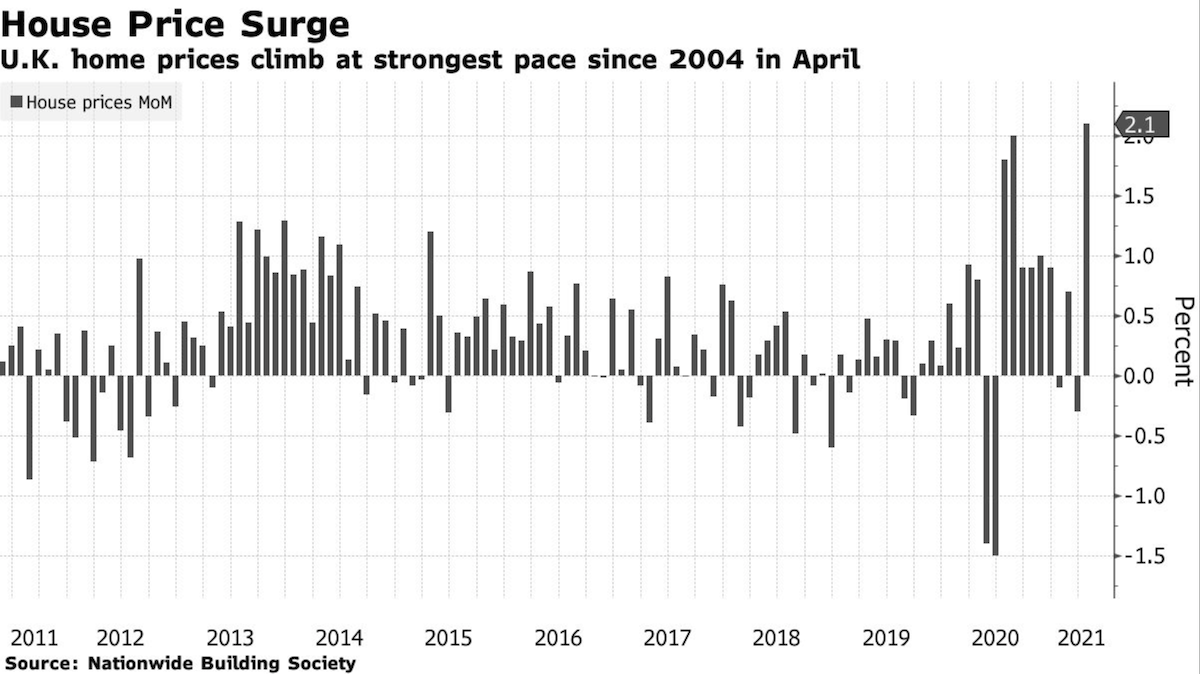 Bloomberg Economics capture what has been happening perfectly. “The disconnect between Britain’s booming housing market and an economy floored by the pandemic is set to continue. The pandemic has also led to significant behavioural shifts. People are now re-evaluating their location as the proximity to the office becomes less of a priority and the demand for larger homes with outdoor space becomes more important. That will sustain demand later this year, albeit at a slower pace.”

Many estate agents are predicting another strong year for the housing market with growing optimism about the economy as restrictions are eased and the roll out of vaccinations gains pace. Nationwide said a surge in household savings over the pandemic helped more people with deposits; “while the stamp duty holiday is impacting the timing of housing transactions, for most people, it is not the key motivating factor,” said Nationwide’s Chief Economist Robert Gardner. “Housing market activity is likely to remain fairly buoyant over the next six months. Further ahead, the outlook for the market is far more uncertain.”

However, it is expected that the limited stock of housing and the improved economic outlook will add further upward pressure. Andrew Wishart, property consultant at Capital Economics, forecasts that house prices will continue to rise over the next four years, albeit, not as rapidly as they did in 2020.

That’s all folks!
Have a cracking bank holiday weekend.