Please find below our interim Investment Market Update as at 22nd October 2021.

The fortunes of the pound have changed over the last few weeks. I’ve spoken to a couple of clients this week who thought the pound had weakened against both the dollar and the Euro, but this was old news, albeit from not that long ago, reinforcing how quickly market forces can change.

Why has the pound strengthened?

UK rate markets are pricing in a couple of interest rate hikes over the next few months. A rise in interest rates ordinarily causes the host country’s currency to strengthen.

Besides going on holiday and making imports cheaper, why is this important? Certain asset classes can be sensitive to such changes. Furthermore, when investing in global assets and converting back to pounds the less favourable exchange rate can cause a drag in performance. Something which has been evident over the last month or so.

With regards to assets, concerns over the pace of rising interest rates has led to a sell-off in UK gilts, sending yields higher. Typically, this would create a drag on balanced portfolios where the likes of gilts would be held to ironically create ballast and protection for portfolios. Whilst we do have some exposure to gilts, our holdings are light as before the pandemic we opted for alternative assets, like infrastructure, which deliver more attractive yields.

Over the year, 10-year gilt yields have almost doubled from circa 0.6% to 1.2%. Fears over inflationary pressures and the possibility of rising interest rates being the cause.

As LGT Vestra commented recently though, rising interest rates don’t have to be negative for risk assets like equities.

The question being posed by the investment markets and investors alike is whether raising interest rates will put the brakes on economic growth. It’s interesting to note that the Federal Reserve is not expected to raise rates until autumn 2022 while the European Central Bank and Bank of Japan are likely to keep rates on hold for longer. In our minds, this reinforces our conviction for global assets and our recent moves towards Europe.

The UK is therefore likely to be the first western economy to raise rates.

LGT Vestra nicely summed up three determining factors which will decide the impact on markets, and these are: –

The Bank of England (BoE) are in a difficult position as inflationary pressures continue, and economic activity appears to have peaked. There is a risk of tightening too quickly which could tip the economy back into decline and there is the risk of being too relaxed with policy, which would likely lead to more aggressive rate hikes down the line. However, the BoE chief Economist has warned that UK inflation is likely to hit 5%.

Increasing rates whilst the economy is entering a slowing phase could be the straw that breaks the camel’s back. Factor in the higher gas prices, global supply chain issues and higher wages, there is likely to be a pullback in growth for the UK economy just at the wrong time. This sentiment has proved to have an adverse effect on both mid to small cap stocks recently.

It pays to be active

LGT Vestra have been reducing duration (from longer dated to shorter dated gilts) and are keeping a keen eye on gilts as a potential investment. They remain increasingly active in the fixed income space as the reduction in duration is likely to be temporary.

In January, they chose to reduce our exposure to Investment Grade credit. This is an area you may remember me saying they added to significantly in 2020, both in March and April when credit spreads had blown out to historical wides and the market was receiving significant Government support.

The portfolios have weakened but the FTSE 100 has risen!

This has come up in discussions in recent weeks and the simple answer is that the FTSE 100 is a concentrated basket of sectors and stocks, and it is not a reflection of the health of the UK economy. A rise in oil prices and potentially interest rates has played into the hands of the large energy providers and banks.

As mentioned above, UK mid-cap and small cap stocks are more a representation of the health of the UK economy.

Global equities have not been immune from hikes in energy prices and fears over inflation. Add into the mix the strength of the pound and you can understand why there was some short-term weakness.

Inflation is a global phenomenon 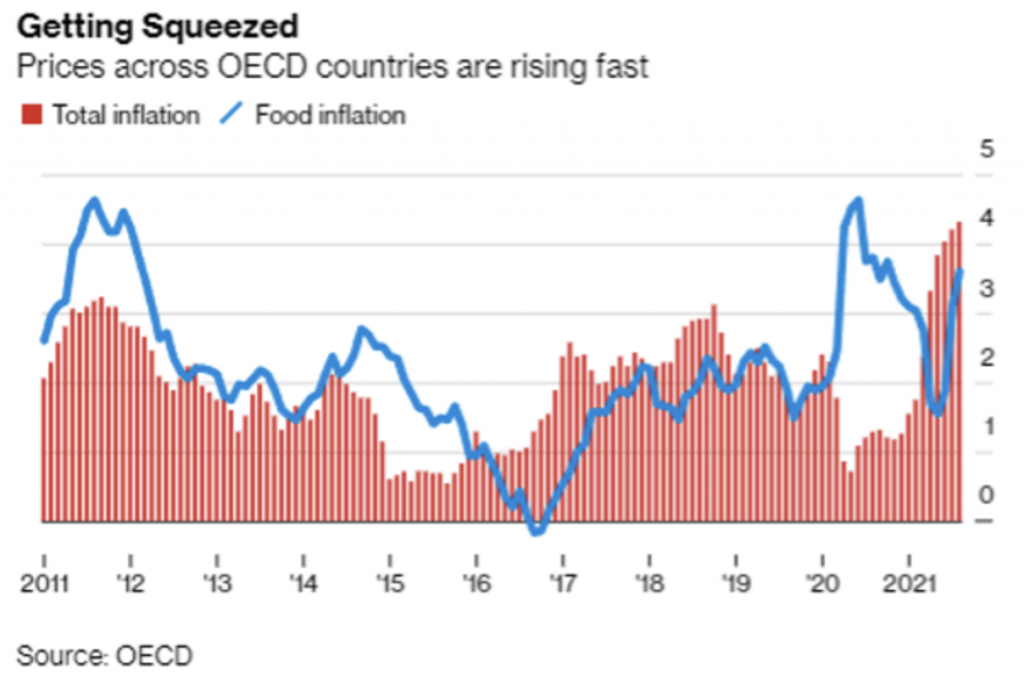 As reported in Bloomberg this morning, consumers around the world are set to be hit with even higher price rises because of the global supply chain issues.

From an equity investment point of view, companies that can pass on price hikes to consumers are certainly more attractive that those that can’t.

On a brighter note

Despite the pressures, over the last two weeks (from the 8th October 2021) there has been an about turn once again and all our portfolios have outperformed the FTSE 100. Reinforcing our commitment to global assets.

Global stocks are in fact set for their third weekly advance. It just goes to show it pays not to focus on the headlines too much as last night the S&P 500 in the US, posted a record high on the back of strong corporate earnings. Leading the way were stocks such as Microsoft, Tesla, Netflix and Amazon. The stock price of electric vehicle maker Tesla rose to a record high after beating earnings late on Wednesday. Thursday marks the seventh consecutive day of gains for the S&P 500, the longest winning streak since June 2021.

At least the markets aren’t as changeable as the weather!

Have a lovely weekend.