Please find below our interim Investment Market Update as at 19th March 2021.

Gary is having a little break this week so the below has been prepared by Andrew Dunn, known to many of you as Gus.

The recent volatility has receded a little, with major markets pretty level over the last week at the time of writing. What also continues to be true is the differing interpretation of news, depending on the narrative that is sought.

As has been the case for a very long time, it is news in the US that dictates what happens next across most markets. During the first part of the week, world markets took their lead from the continuing resilience of the US, where the Chairman of the Federal Reserve made it clear that their ongoing support would remain in place until the economy had made substantial progress. It is difficult to judge how this progress will be quantified as the US appears to be recovering strongly already. This has been backed up by an improved economic growth forecast, with Bank of America suggesting a near 8% jump this year. Whilst this is very much boosted by coming from a low post-pandemic point, it remains a rate unheard of in developed economies.

Very strong company results from JP Morgan Chase and Goldman Sachs yesterday add further support to this story. Toward the end of this week, this strong growth was cited once again as a concern in relation to the inflation that could follow. It is highly likely that this push me/pull me will remain until a clearer picture emerges.

A similar growth story is building in the UK, where the Bank of England has said our economy is recovering faster than they had anticipated. This supports our own view here at Blue Sky that the UK is a good place to invest right now.

Whilst we covered this topic last week, it is again in the news and remains one of the key areas to consider. The much-awaited announcement by the US Federal Reserve told us that whilst they see an uptick in inflation this year, as a result of economic recovery, this would be short-lived and would fall back in the next two years. Whilst this is hotly debated in some quarters, it does set the scene for a continuing period of low interest rates.

Inflation in the UK appears to be on a similar path, with the Office for National Statistics forecasting that the rate would be at 2% in 2025, with small incremental increases between now and then. The measure of inflation is regularly reviewed for relevance and this week the pandemic has meant that hand sanitiser and men’s jogging bottoms have been deemed worthy of inclusion! For fans of the Milky Bar Kid, bad news I am afraid, as the falling popularity of white chocolate has led to its exclusion from the measure.

Although we are not, at present, worried about inflation, nor are we ever complacent with client money, all our portfolios have a broad range of assets and equities are an excellent way of providing protection from higher inflation. Specifically, we look for companies with strong balance sheets, high returns on capital and most importantly, a meaningful competitive advantage which we believe will prevail over the long-term, regardless of the interest rate environment. This allows these companies, to a large extent, to control their own pricing, rather than be hostage to inflation.

The decade of Asia

This was the title of a virtual seminar from a major investment bank we attended this week. Whilst there was clearly an agenda to promote the region, the story is a powerful one. Asia is already home to 60% of the world’s population and by 2050 China, India and Indonesia are expected to take 3 of the 5 top spots in the world economic ranking. This is being driven by an increasingly wealthy and acquisitive middle class, combined with a strong focus on technology and innovation. As economies possibly shift from a policy of globalisation to regionalisation, it is inevitable that countries with large regional populations will gain economic traction.

Given this backdrop, it is understandable that the UK is looking east for trade agreements. The policy that was previously to be the Trans-Pacific Partnership, now CPTPP, is a hoped for trade agreement involving countries representing 14% of global trade. It will include Vietnam, Singapore, Japan and Australia.

As an investment, Asia is attractive and is held in all of our client portfolios, with larger weightings in the higher risk mandates. LGT Vestra have recently issued an update on developments in China, which is detailed here:

The Chinese Government published its fourteenth five-year plan last week, setting out a myriad of their social, economic and strategic goals. For the first time in the history of the five-year plan there was not a specific GDP growth target set, instead the plan focuses on other goals such as unemployment rates, research and development investment and sustainability goals.

The Government will set a GDP growth target each year at its own discretion and has opted for a rather conservative figure of 6% for 2021, which is likely to be vastly exceeded as the economy bounces back from COVID-19. The International Monetary Fund have forecasted the Chinese economy to grow by over 7.5% this year.

Annual real GDP growth in China since 1996, actual and targeted 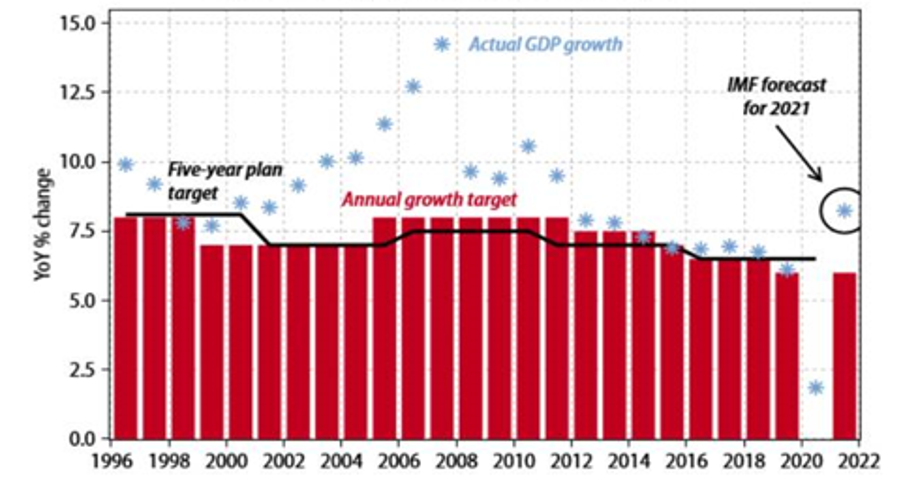 Innovation is at the forefront of the Chinese plan with a specific target of increasing research and development spending by at least 7% annually. Again, this is a somewhat conservative figure as over the last 25 years it has never fallen below 8%, but this does signal a continued strategic focus on this area. The renewed five-year plan is very much a continuation of their ‘Made in China’ 2025 strategy, which aimed to move the Chinese economy away from being a producer of cheap low-tech goods into less labour intensive sectors.

These policies will likely benefit a few of the funds held within the LGT Vestra Model Portfolios as, for example, the Morgan Stanley Asia Opportunity Fund has large holdings in innovative companies and will likely be boosted by continued Chinese government expenditure on research. The Impax Asian Environmental Markets Fund will also be a beneficiary, as further attention and resources are likely to be allocated to green energy and infrastructure spending.

The plan also captured elements of the tensions between China and the US as it featured a dedicated section on the development of security for the first time. This section incorporated aims surrounding the improvement of national security and arrangements to ensure food, energy and financial independence.

Overall, the plan demonstrates a more nuanced approach to China’s development goals over the next five years and more, with less focus on quantitative GDP figures and more on qualitative factors that will take the Chinese economy to the next stage of growth. China’s heightened focus on self-reliance boosts the decoupling narrative between China and the West, further highlighting the importance of a diversified portfolio with assets in both Asia and the West.

It is clear that investing Sustainably is a mainstream option and increasingly prevalent in all aspects of life. It is therefore great to see institutions like the FCA giving their support. As investors, we know that having a balanced and diverse workforce creates a better, more innovative and profitable business. It represents the ‘S’ in ESG, (Environmental, Social and Corporate Governance), and is such a big part of Sustainable investing.

In the US, the hugely successful technology index, NASDAQ, requires all new companies to have, or explain why they do not have, at least two directors from diverse backgrounds. The Chief Executive of our own FCA this week said they are considering a similar requirement for diversity and equality. It has therefore set its own target to have at least 50% female leaders by 2025.

Legal and General, one of our valued investment partners, are the first fund manager to tell FTSE 100 companies that they will vote against the Board if they cannot evidence they have a plan to increase diversity by 2022.

A massive step in the right direction.
Wishing you all a great weekend.