Please find below our Investment Market Update as at 20th November 2020.

The Biden bounce, the Vaccine vault… now what?

Don’t you just love the artistry in the world of economics and investments?

There is no doubt that there are more reasons to be cheerful than a month ago. Here in the UK however, we now have to navigate the Brexit……! (Perhaps I’ll leave you to insert your own catchy word here.)

The outlook from strategists

There was a good article on Bloomberg yesterday reflecting the more upbeat outlook. They asked strategists about the Stoxx Europe 600 index and their thoughts from now until the end of next year.

On average, the strategists see this index rising by 2.2% from now until the end of 2021. The most bullish prediction implying a 22% gain. The really good news is that collectively, they see very little downside.

Of course, this should not be taken as being representative of stock markets as a whole, because there are so many different dynamics taking place across the sectors in a variety of countries and geographical regions. 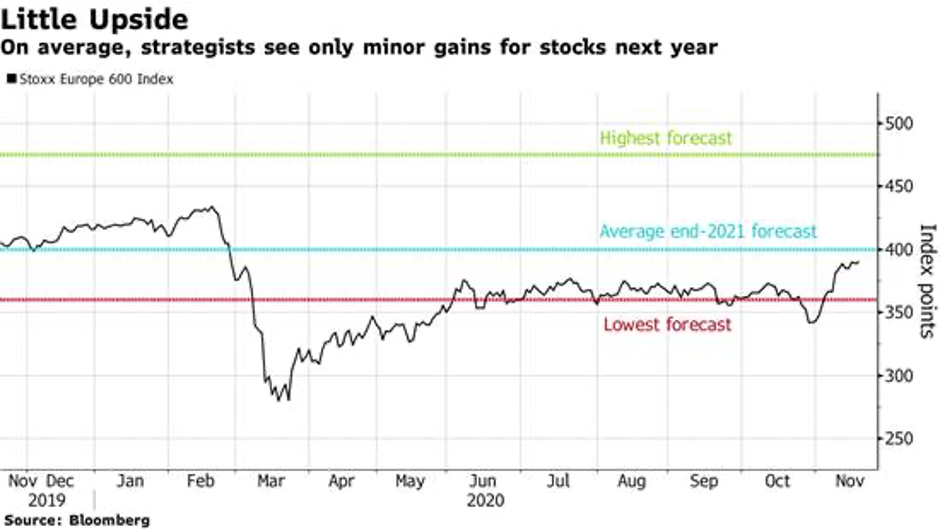 Why it’s important to splash the cash!

You don’t have to embrace significant risk. I’m not suggesting investing into individual stocks and shares, but when we sit back and look at what has happened over the last year, even with the deepest recession in history, there have been good gains to be had across our most cautious funds.

This should not be taken as specific advice but is merely meant to highlight the importance of not being complacent, especially if inflation begins to rise. Leaving money on deposit in this environment will guarantee that you lose money over time, in real terms.

Merger and acquisition activity is an important barometer

Earlier this week, companies announced $40bn of deals in one day as executives put cheap debt and cash reserves to work. Just like individuals, many companies have been hoarding cash as a buffer to the economic downturn, but confidence is clearly starting to return.

The catalyst being positive news of a Covid vaccine and the conclusion of the US elections have encouraged companies to revisit proposed mergers and acquisitions.

An article  in the FT referred to the comments of Bill Demchak, the CEO of the US financial services company PNC, stating “​even though we’ve had a recent spike in [Covid-19] cases, we have in effect put a floor on the downside case, and of course, both the Fed and ​the​ US government responded forcibly with fiscal and monetary stimulus.” ​

The result of the US elections should not be underestimated because it was feared that if the Democrats had won easily, then they could have controlled both Congress and the Senate which may have led to higher taxes.

The above is very relevant when talking about the UK. It has been widely reported that taxes will be hiked in the UK to help pay for the Covid rescue package and of course, Brexit. Reports suggest that the Chancellor is looking to squeeze public sector pay. This will of course be a U-turn from just over a year ago when we were promised an end to almost a decade of austerity.

Obama in his memoirs, criticised the UK government for implementing austerity and consigning the UK to economic hardship. The indications being that we should have instead stimulated growth and business. Hopefully, we are not going to make the same mistake again. Like in the US, UK businesses watch with bated breath for the decisions from the Chancellor in the Spring. Making the tax regime significantly more penal will only serve to hamper growth and limit merger and acquisition activity.

Steady as she goes!

Bank shares have responded well to the probability of a successful vaccine and the likelihood that they will have less bad debt and benefit from a stronger economy.

This week the Secretary General of the Basel Committee of Regulators, Carolyn Rogers, has said it is far too early for banks to take a “victory lap” over their response to Covid-19, arguing that shareholder pay outs should remain on hold until the long-term impact of the pandemic is clear.

She went on to comment in an interview with FT.com, “Banks are not pulling back credit like they did [during the financial crisis] to save themselves at the expense of the broad economy. That’s a good thing, we can give them a gold star and a pat on the back, but we should also remember this is part of their job. Banks are supposed to absorb and not amplify shocks and downturns to the economy.”
This was in response to a clamour for Banks to start paying dividends. When Covid-19 spread throughout Europe and the US in the Spring, global regulators effectively banned dividends to ensure banks retained sufficient capital to continue lending to struggling companies.

“We are all in this suspended reality. As government support programmes expire some businesses and households are going to fare better than others, there will be losses and the scale is unclear at this stage.” Carolyn added, “there is a long way to go.”

A steady hand on the tiller

It’s looking brighter but we must not be complacent. A steady hand on the tiller is what is required, although without a doubt there are opportunities, especially in sectors which are seeing innovation and merger and acquisition activity.

Vaccine hopes have been a game changer in bringing hope and a shot of confidence, and the indications are that we can all look forward to a more fulfilling 2021 all round. Let’s hope so!

Have a lovely weekend. Wrap up warm!