Please find below our interim Investment Market Update as at 17th September 2021.

I have been talking to a number of clients recently who have been delighted with how well their portfolios have been performing, although two of them said “up until last week that is”!

Actually, the comments were made ‘tongue in cheek’ but it does remind us of how markets typically behave. Just to be clear, we are relaxed about the recent pull-back and actually welcome some of the froth being taken off the top!

What is bothering investors?

I’ve covered off the main concerns many times but global growth, particularly in China and the US, is slowing. An update from LGT Vestra stated that the US vaccination programme seems to be less effective at breaking the link between new Covid-19 infections and hospitalisations, with unemployment falling slower than expected. Unlike the UK.

Whilst the slowdown initially reflected the fading fiscal stimulus, there are now other factors weighing on growth. However, the consensus is notably less fearful than the earlier phases of the outbreak. A recovery in service and travel sectors is now levelling off, as opposed to going into reverse, which LGTV believe isn’t overly surprising, considering spending output has already surpassed its pre-pandemic peak, in real terms.

Assuming that the rise in new cases will begin to taper off over the next few weeks, and activity remains unrestricted, then the impact on demand will be more modest than in previous waves. 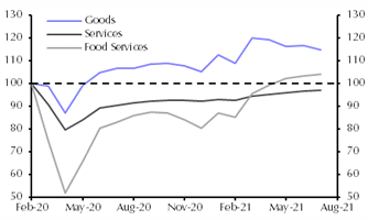 The brakes of the supply chain

As we have all seen in our supermarkets, some supply chains have been seriously disrupted. If this continues for a prolonged period then this will hit global manufacturing, limiting growth, leading to upward pressure on prices and a real reduction in income. This in turn would negatively impact spending.

However, there is light at the end of the tunnel. Much of the recent supply disruption will likely fade over the coming months and into 2022, especially those owing to the extreme weather conditions we’ve seen in Brazil with drought,and the flooding in China. Furthermore, much of the increased demand for goods such as electronics should decrease as service sectors in advanced economies reopen, and the pattern of goods consumption normalises as per the graph below. This should reduce the strain on the supply of semiconductors, aided by the re-opening of factories in Southeast Asia, where falling cases will allow the loosening of quarantine restrictions.

Don’t be spooked by the data

Another conversation I had recently with a new client alluded to his hesitation for invest more money when growth appears to be slowing. As in life, it’s important not to generalise as this can overlook the positive dynamics in other areas.

Economic data is backward looking and if, as LGT Vestra suggest, there is light at the end of the tunnel, then expect equity markets to be forward looking and respond positively.

As reported in Portfolio Adviser, July is the sixth month in a row that UK economic output has expanded. However, GDP still remains 2.1% below its pre-pandemic level.

“A sixth consecutive month of growth might sound reassuring, but growth of only 0.1% in July falls well below even cautious expectations – and coldly exposes the fragile reality of the recovery in general,” says You Asset Management chief executive Derrick Dunne. Despite this, Dunne added that now is not the time for savers and investors to lose faith in UK equities.

“Slowing though it may be, the recovery is still for the moment underway and continues to present important opportunities,” he says. “Continue to embrace them, but don’t lose sight of the spectre of inflation and its possible consequences in the months ahead.”

Beige, but not bland

A catchy headline from Legal and General Investment Management (LGIM) as this relates to the ‘beige book’ whereby business and market experts give their views on the developments within the US economy.

The report contained anecdotes of shortages everywhere and painted a picture of an economic recovery stuttering through a supply shock. The growth/inflation mix doesn’t look particularly healthy. We’re told that “economic growth downshifted slightly” in an environment of “pervasive resource shortages”. Labour shortages are one such shortage and this is very apparent all over the western world.

Bloomberg’s Lisa Abramowicz put it really nicely when she wrote: “It turns out you can’t just stop and restart an economy with nothing changing. People adapt to their realities, and the result is a mass rethinking about their relationship to work — where and how they want to live, what they want to do and how much money they need to make.”

The obvious question that follows from this is “so what?” The markets have been remarkably sanguine about the above so far. Anyone strategically reducing their risk and placing money in cash in anticipation of this threat over the last six months has lost money. Here at Blue Sky, we are still strongly aligned to equities but are closely evaluating a number of scenarios and the potential impact on asset classes.

We spoke to LGIM, one of our investment partners and their overall assessment hasn’t changed:

The bottom line is that they remain positive on equity risk over the medium-term despite the rally that is already behind us.

In an article by Ellie Duncan in Investment Week, the results of a Bank of America (BofA) European fund manager survey were discussed.

The BofA Global Research report found that fewer than 5% of investors think the market has peaked, although a growing minority of 16% believe the European equity rally will come to an end in the third quarter of 2021. However, reducing one’s equity exposure too early was identified as the biggest risk by 55% of participants, up from 35% the previous month.

The survey revealed that respondents perceive the risk of Covid to be fading, with only 3% of investors seeing it as a ‘significant risk’ to the macro-outlook, whilst a majority of 68% believe risks are contained, as high vaccination rates keep hospitalisations and deaths subdued.

In summary, equity markets are still the favoured asset class and in the main we are optimistic for further growth. Don’t be drawn into generalisations, some thematic sectors are booming on the back of stimulus and inward investment.

Have a great weekend.